I talked to Violeta Rivera — a Peruvian immigrant who came to the U.S. 17 years ago — about her plans to open up her own bakery. After finding some success in Peru, she sacrificed her passion in order to provide for her family in the U.S. Now, years later, she hopes to return to her art and baking by opening up her own business.

It Is Never Too Late

A Peruvian immigrant reignites her passion for decorative cake work after decades of providing for her family.

It is Never Too Late

Standing in her Northeast Philadelphia dining room, Violeta Rivera, 54, molds rose petals gently between her fingertips, as a white and orange cat plops down on the shiny hardwood floor.

Rivera smiles as she describes the intricate process of making rose petals out of sugar.

Rivera discovered her passion for art at the age of eight when she saw a jack-o-lantern for the first time — and discovered the power of an image.

“I would draw its face on the blackboards — it was so ugly that it scared the people who passed by,”  Rivera says with a small laugh. “My sister would tell me how scary it is.”

Rivera grew up in a village called Tarma, in Peru. As a child, she loved painting — but her father had other plans.

“In our culture, because we had a family business, [a] mechanic shop, my parents thought I would dedicate myself to continuing it,” Rivera says. “Therefore, art was put to the side.”

Rivera eventually moved to Lima, the capital of Peru. There, she got married and moved in with her husband, which inspired her to start taking cooking classes. She then took an interest in the decorative cake classes.

“Because I already had the artistic vein, it really impacted me,” she said. “I learned to use sugar like art.”

Rivera developed her cake-decorating skills and started teaching her own classes around Lima.

“I feel very happy, very satisfied, when I do a painting or a cake decoration,” Rivera says. “Because it is a part of me that I try to make beautiful, pretty.”

Rivera decided to move to the United States in 2001. After a recent divorce, she wanted a fresh start, and to provide her daughter with the best opportunities. However, she had to return to Peru in 2002, when the pressures of living in the U.S., and her long work hours, impeded her ability to take care of her daughter.

After a year in Peru, Rivera returned to the U.S. — this time with her mother, who could help take care of her granddaughter.

Rivera soon delved into the workforce in order to help sustain her family. She worked at a plant nursery in New Jersey.

“It was really hard because the nurseries were very hot and for me working in the heat is difficult,” she says. “I was bent over all day. It was extremely difficult.”

Over the next few years, Rivera continued to work in factories and large bakeries, and now works as a housekeeper. Working and caring for her family became Rivera’s priority.

“I liked the idea of giving my family a better life,” Riversa says. “For my daughter, my mother. Because here everything is cute, it’s pretty. I used that as an incentive, the well being of my family.”

That meant leaving her art unattended.

“I couldn’t dedicate myself to building a business, not even to cook,” she says. “Because, for one thing — the language; second, you need investors; and third the exhaustion. Truthfully, as immigrants, we go through so many problems. A lot of things distract us. I never focused on myself.”

Rivera says it was the only piece of art she’d done in three years.

Now, at the age of 54, that’s starting to change. Rivera has been forced to slow down due to problems with her knees and legs that started developing in 2016.

“When I had more time, when I wasn’t so busy, I started to think that I needed to change,” she says. “Now that I am not working full time, due to my physical problems, I have started to get the idea to retake my path.”

Rivera is in the process of launching a cake decorating class, and hopes to eventually open her own bakery. She’s also resolved to spend more time creating and promoting her art.

Rivera has redone her floors, removing the carpet in favour of hardwood, which she learned in Peru is better for baking classes. She is also attending financing classes at FINANTA, a non-profit lending institution that offers entrepreneurial programs.

At a recent session, Rivera says, she was asked who inspired her, and she said her father.

“He made a business in Peru out of nothing,” Rivera says. “He came out of poverty, and created his own mechanic shop.”

Rivera has cut back on her housekeeping, and now only works on the weekends. With the help of FINANTA, she is developing a website to promote her business. She hopes to start her classes in a couple of months.

“Despite my health problems, which would give me a motive to be sad, I have found another way to focus my life,” she says. “Humans, we are like seeds — we stay inside and then boom! We blossom.” 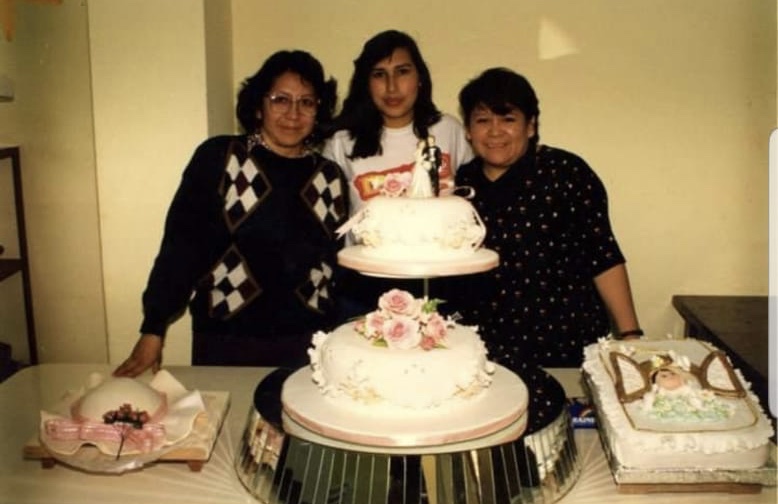 Violeta Rivera (right) stands with a former student (middle) and her sister Angelica Rivera, (left) after completing Violeta’s baking class in Peru. In the middle is Violeta’s cake, which she often used as an example. 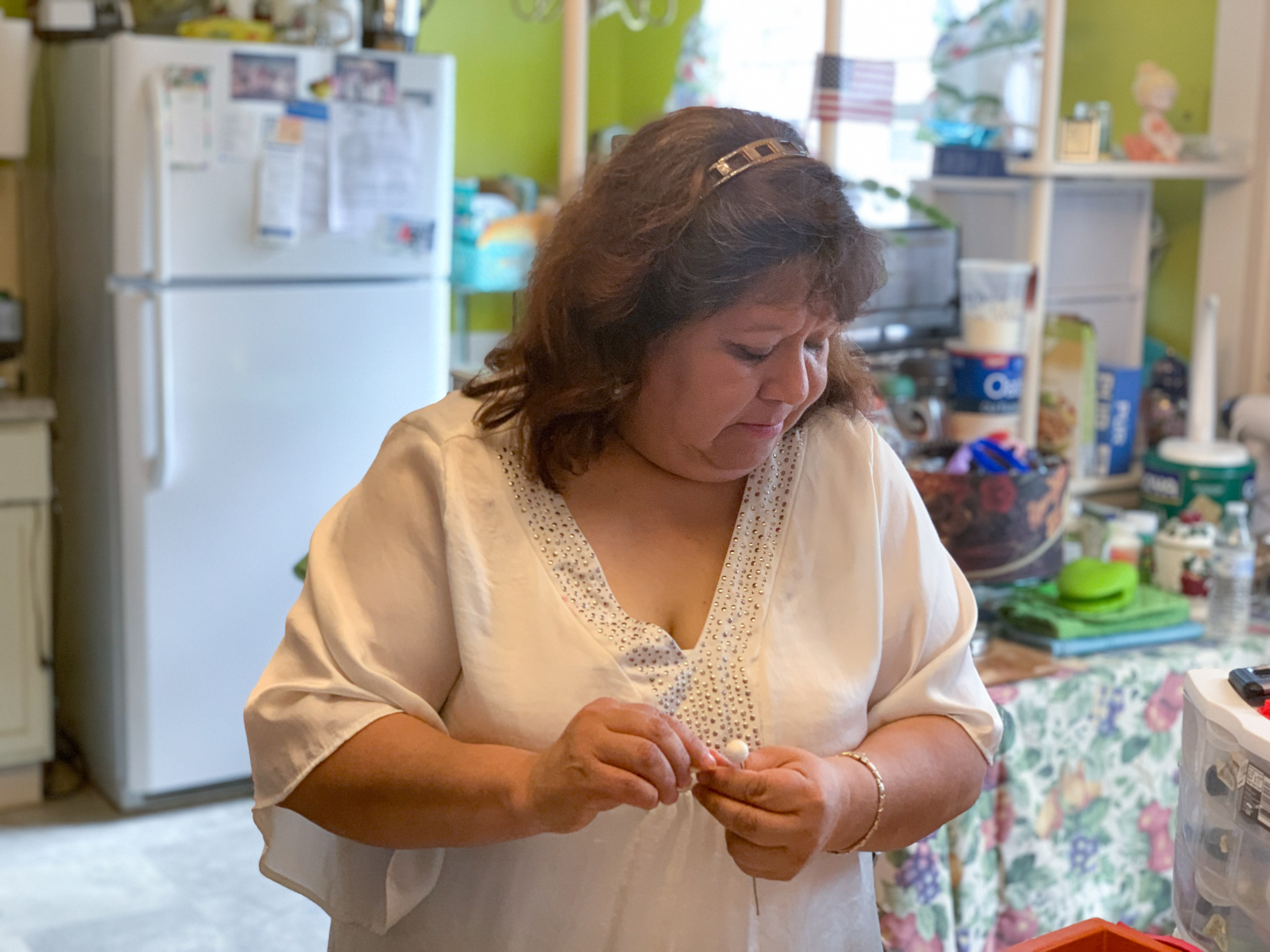 Rivera in her dining room molding the beginning of a white flower. 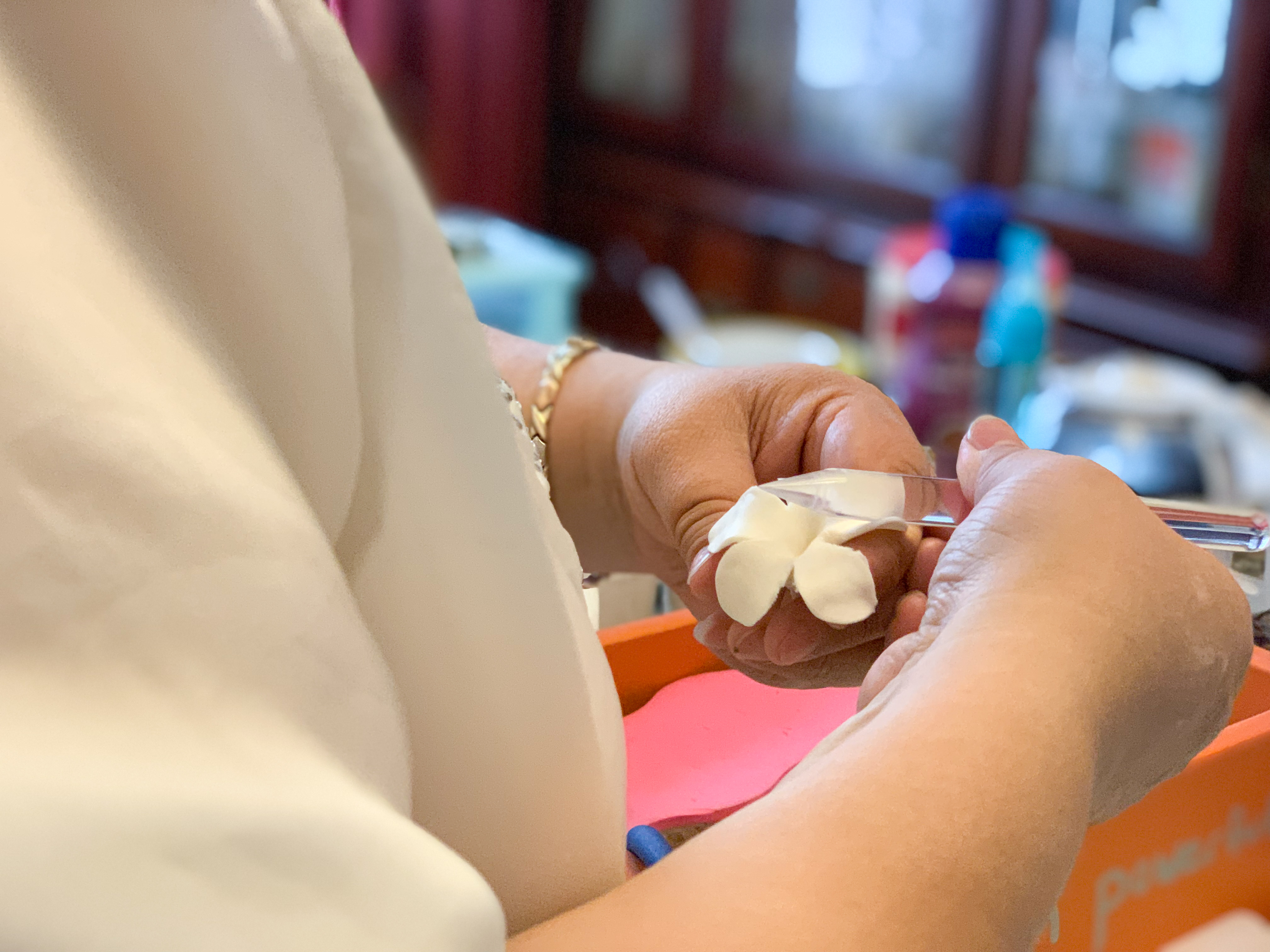 Rivera shapes the petals of a sugar flower using a specialized tool. 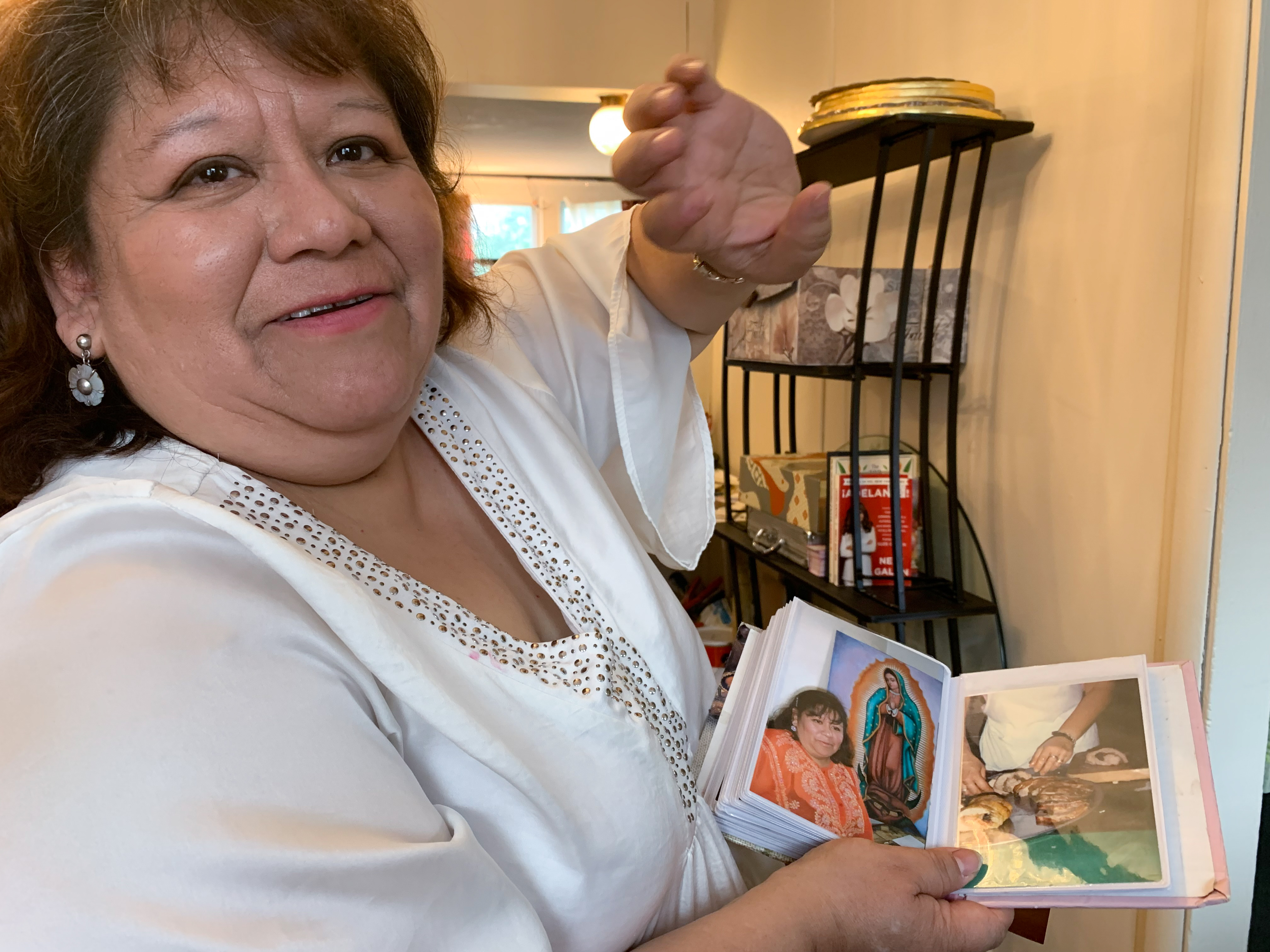 Rivera shows off photos of her culinary and artistic work from Peru. The painting of the Virgin Mary pictured on the left currently hangs in her living room. 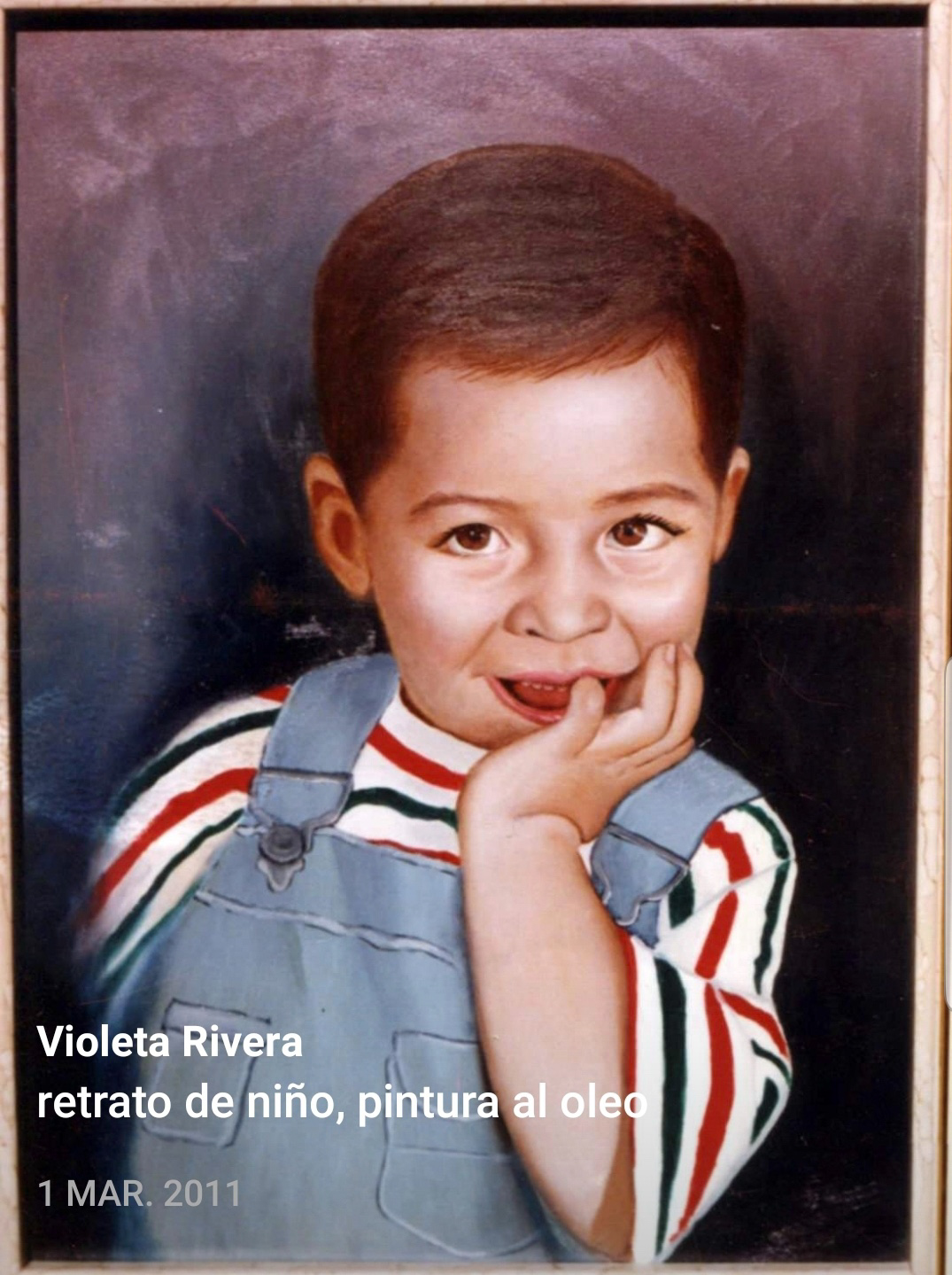 Rivera’s oil painting, “Portrait Of A Boy.” Rivera says she wants her art to “portray the kindness and light of the world.”      PHOTO COURTESY OF VIOLETA RIVERA 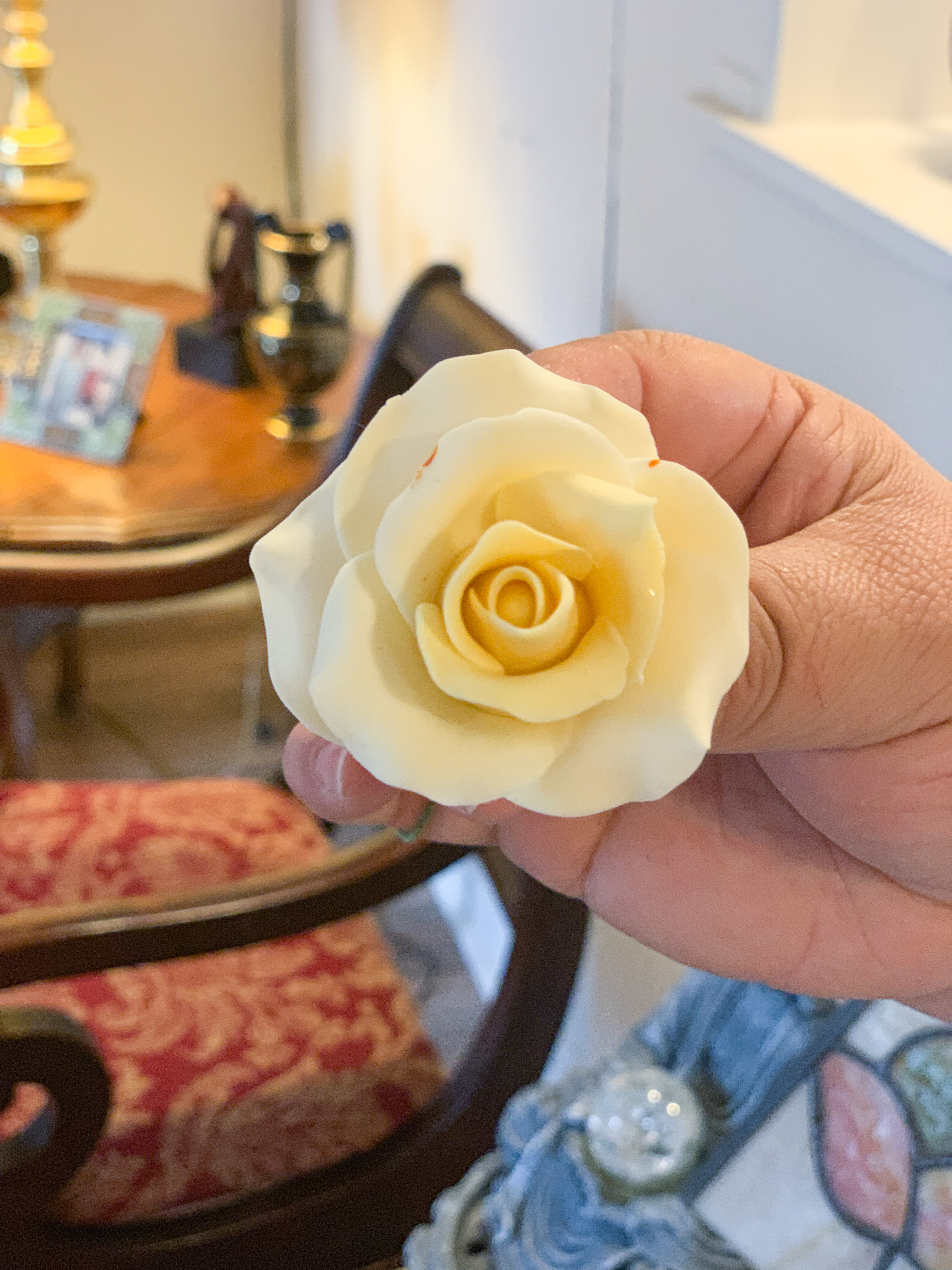 “The majority of people can bake a cake,” Rivera says. “I want to show people the art of sugar creations.”

“Truthfully, as immigrants, we go through so many problems. A lot of things distract us. I never focused on myself.”