I’m interviewing Henrik Adamson, who goes by the stage name, The Estonian Superstar, at the Combat Zone Wrestling ring where wrestlers come to compete. The CZW is one of the many places he trains and fights. In the ring, Adamson is seen as more than just an immigrant.

A wrestler is challenged by more than just his opponents. This Dreamer’s status could be at risk if he takes the next step in his career.

Henrik Adamson, draped in the Estonian flag, pulls back the black curtains. The crowd has mixed reactions, some bow down and yell “the Estonian Icon” while others boo him. Every Wednesday night Adamson climbs onto the Combat Zone Wrestling (CZW) ring at the Dojo Wars in Voorhees, New Jersey.

He stretches out his flag and yells to the crowd, “Take pictures right now, this is your moment.”

Adamson is performing, but he struggles with the next steps with his wrestling career.

“Everytime I go out in that ring I tell everyone I’m the Estonian Superstar,” Adamson said. “I’m special because I’m from Estonia, because there is no wrestling scene in Estonia.”

At seven years old, Adamson came to America with his three siblings and their mother to seek safety. A split decision made in the middle of the night, his mother made the call to flee Estonia. Three plane rides later they arrived in Florida, where he lived for two years.

After Florida, his family moved to New York for another three years and then finally settled in South Carolina.

Being an immigrant and constantly changing elementary schools, Adamson said it was hard for him to adjust to the new American culture.

“Everything about the culture, the American way, everything confused me,” Adamson said.

The English language confused him. Adamson laughed at the speech used by his peers, which often led to physical fights.

One day as he was flipping through television channels, he stopped on a show that showed Kurt Angle slamming Big Show, two famous wrestlers, through a table.

“These guys are literally larger than life,” Adamson said.

He was instantly hooked into the world of professional wrestling.

With wrestling as his guide to American culture, trash talking and fighting — much like the people he saw on TV — became his way of communicating with the other kids.

“A lot of the times I would say things that would make people mad.” Adamson said. “And I didn’t know that because I couldn’t. I thought I was a wrestler you know, before anyone even put the idea that this is something you could do, I was doing it in school.”

In high school, he started to look into colleges and scholarships, but when his counselors asked for his birth certificate and social security number, and he did not have those documents.

He even looked into enlisting in the military, but ran into the same problem–no documentation. So, he was turned away.

Without those documents, he could not work, either.

Adamson went back to wrestling.

“[Wrestlers] don’t need college. These guys don’t need to be a professor. They don’t need scholarships. Pro wrestling…you just do it.” Adamson said.

There are no academic requirements for wrestling, but it can be expensive. Fighters have to pay for training school, equipment and travel.

Adamson was inspired by the creation of Deferred Action for Childhood Arrivals (DACA) in 2012, which granted immigrants who came over as a child the right to work and get a drivers license. After pursuing and receiving DACA, he found odd jobs and saved up money.

After months of working, Adamson saw an ad for a wrestling school in New Jersey. He decided to pack up two bags of clothes and his laptop, got in his car and left South Carolina for New Jersey.

Now, Adamson trains at the Monster Factory in Paulsboro–considered to be the first professional wrestling school in New Jersey. As a result of competing and establishing a fan base, mentors and peers tell him he needs to travel abroad to develop his career. However, Adamson is stuck in limbo.

His status as a DACA recipient, prevents him from traveling internationally. If he goes out of the country he most likely will not be able to come back into the United States.

“I feel like I’m stunting my growth,” he exclaimed. He has constant anxiety of not being able to return.

DACA is not a path to citizenship. The only way Adamson can travel internationally without that fear is if he gets married to a U.S citizen or the policies around DACA change.

Another option is for him to compete only in the U.S.

“I’ll make a name for myself just in [this country],” Adamson said. “I can do it, but then sometimes I have those moments where it’s like you know what, maybe this is what stops me.”

—
Even with his status, he says he is committed to wrestling.

Back in the ring, Adamson continues to play the persona of a bad guy as he wrestles against Nevaeh Chantelle–a female wrestler from Camden.

After Chantelle takes a hard smack to the face, she throws Adamson out of the ring.

Adamson gets up, walks out and trash talks while leaving the arena.

This isn’t the end of Adamson, he’ll be back in the ring for Friday night’s Dojo Wars Supershow. 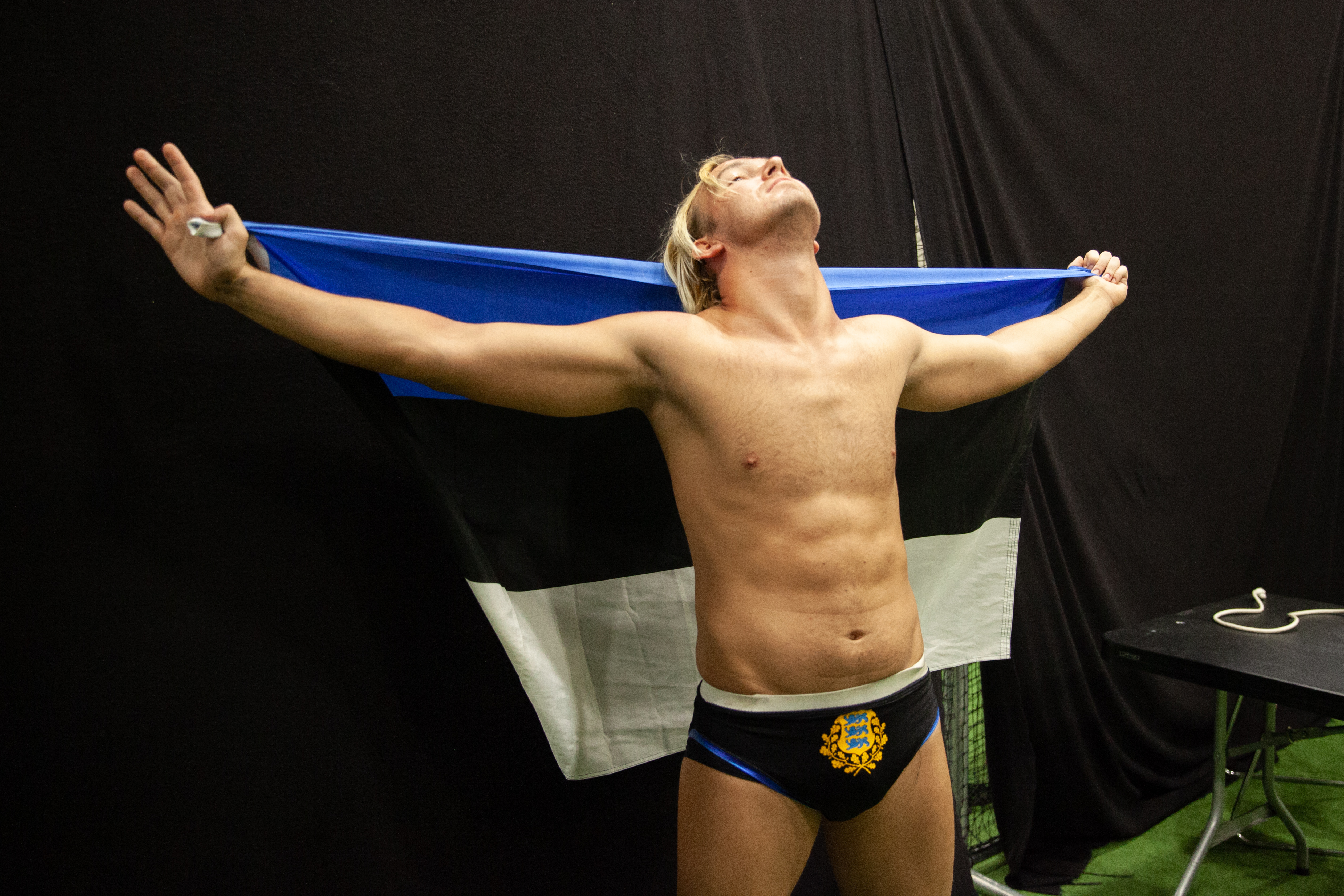 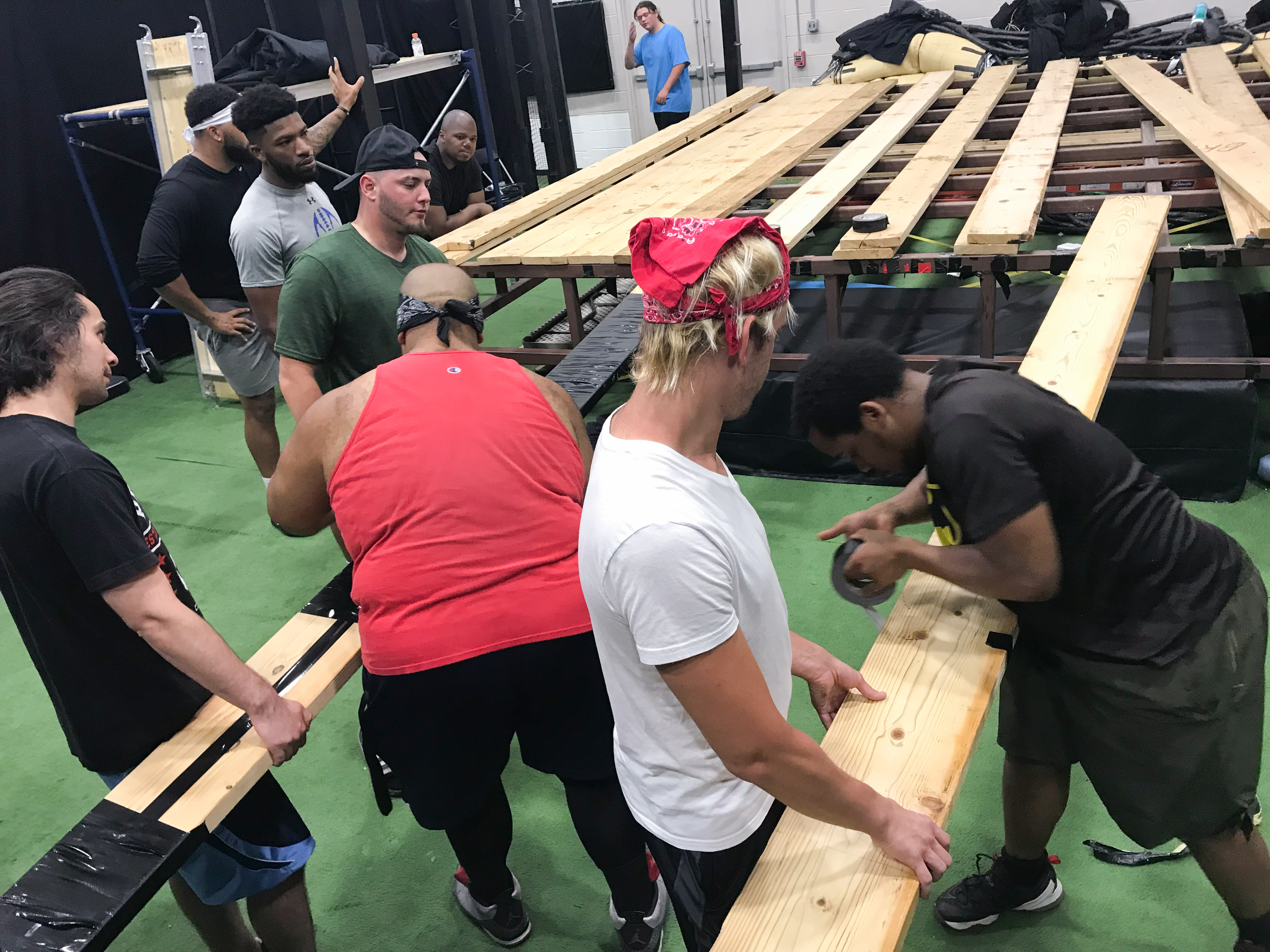 Hard at work, the Combat Zone Wrestling class takes apart the wrestling ring to put it right back together after doing safety checks on the plywood. Safety is the most important part when it comes to wrestling. 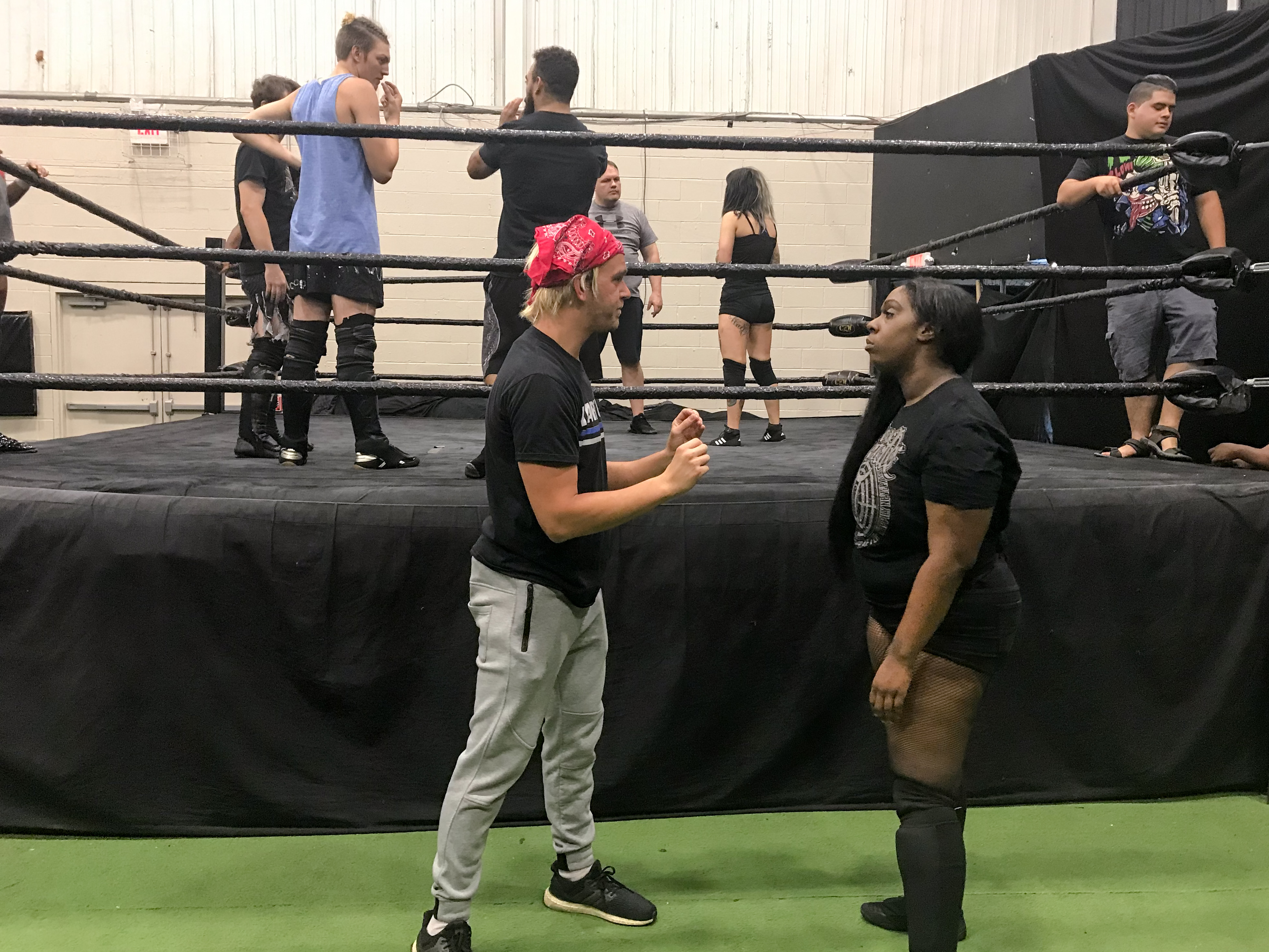 Adamson is rehearsing with Nevaeh Chantelle for her debut fight. 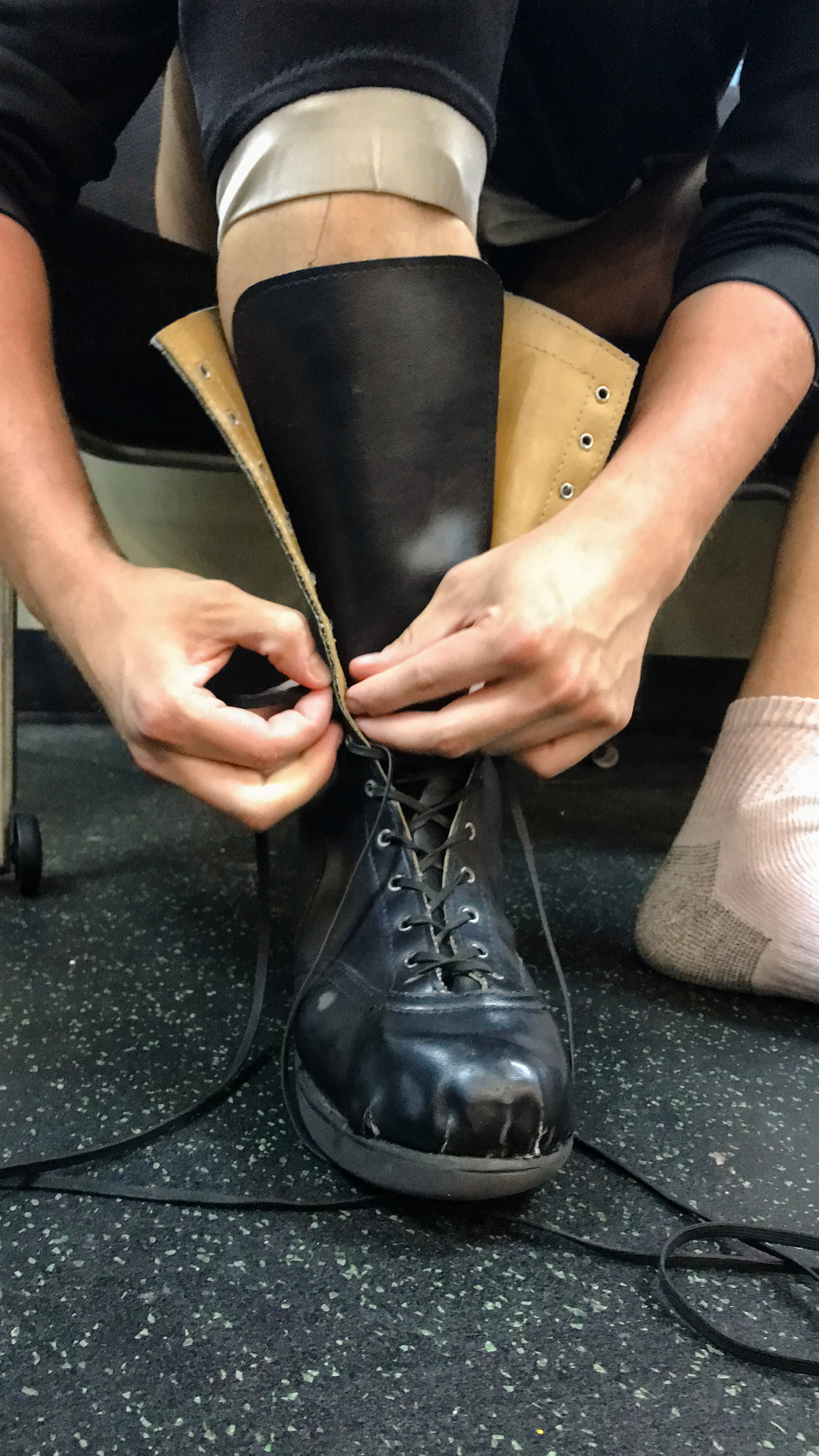 Adamson is lacing up his favorite wrestling boots which were once worn by pro wrestler QT Marshall. 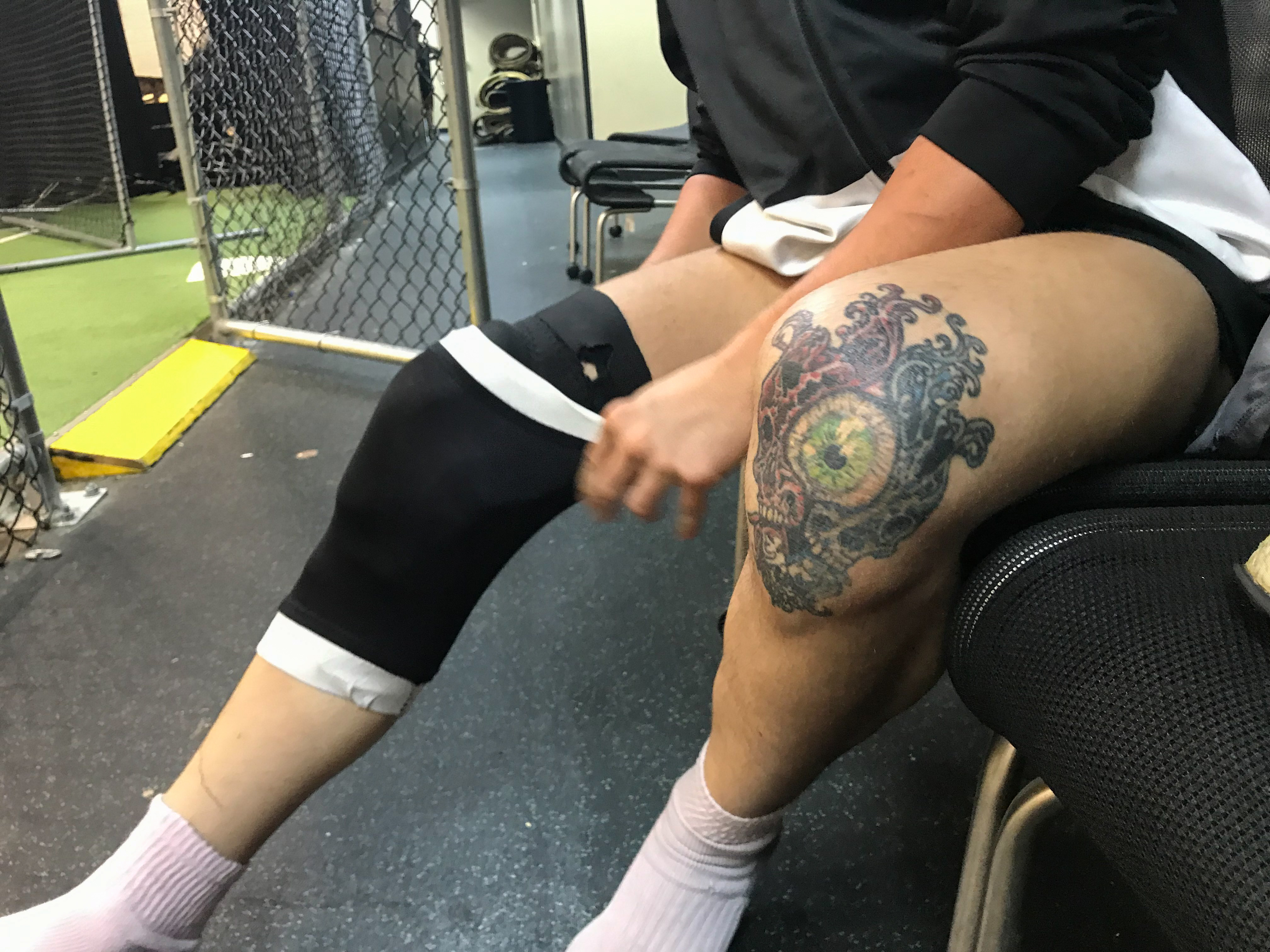 “My sister Anna is a tattoo artist. She tattooed her eye on my knee and I have my eye on her calf. It’s symbolic in that no matter how far away this life takes us, we will always keep an eye on each other.”

Being an immigrant and constantly changing elementary schools, Adamson said it was hard for him to adjust to the new American culture.

“Everything about the culture, the American way, everything confused me,” Adamson said.

The English language confused him. Adamson laughed at the speech used by his peers, which often led to physical fights.