Alexia Oliveira felt unsafe and unheard in Brazil, all while dreaming to be a musician. Now after over a year in Philadelphia, she has found the community and safety she needed to bring her vision to life.

Finding Community Miles Away From Home

A young musician finds community and the freedom to embrace her identity, despite the uncertainty of life far from family and home, and the risks that come with being undocumented.

Finding Community Miles Away From Home

After growing up in Brazil, guitarist Alexia Oliveira discovered that sometimes you have to leave what you know in order to find yourself.

The 22-year-old came to the United States over a year ago to pursue a career as a musician. She initially wanted to enroll in music school, but the cost created a stint in her original plan. Oliveira was left with a tough decision: go back to Brazil and try things out again or overstay her visa.

She took a chance.

“Taking the risk of overstaying my [visitor’s Visa] and leaving my family, leaving all my friends back in Brazil….It’s definitely been worth it, because here I found the community I was looking for,” Oliveira said.

In Brazil, Oliveira felt constricted by the lack of resources and opportunities. Working 40 hours a week teaching English left her no time or energy for her music. After spending an eye-opening year in Ireland, she realized her goals didn’t have to be so limited, and that she could make a living pursuing her passion.

She also didn’t want to go back to Brazil where its anti-LGBTQ president Jair Bolsonaro has been threatening the community since his election in October. His homophobic comments — he once said he’d rather have a dead son than a gay one — have sparked hate crimes in Brazil with a record 420 deaths against LGBTQ people in 2018 according to equal rights association Gay Group of Bahia.

“I feel like [in America] I’m safe walking around the streets holding my girlfriend’s hand,” she said. “I don’t need to feel afraid.”

In Philadelphia, Oliveira found a community and safe space in Global Village, a local entertainment and wellness collective, founded by Lyonzo Vargas.

“Global Village was my first introduction to the spirit of music and creativity there is in Philly,” Oliveira  said.

The group’s goal is to be a form of “resource sharing” and bring people back to their roots. Their form of music therapy/art thrives partially because improvisation is incorporated in each bi-weekly session. Oliveira feels connected to the energy of the space and felt at home.

“I was just amazed by that feeling of community,” she said. “They call themselves a tribe, and I now I feel a part of that tribe. And, I feel like that’s something I didn’t feel back in my country.”

Her consumption of American entertainment started with watching music videos on MTV with her brother, a fellow musician. American folk and British folk influence the Brazilian, bossa nova or Música Popular Brasileira she makes, with Kurt Cobain being one of her biggest inspirations.

Currently, Oliveira creates music in English, Spanish and Portuguese, and with Puerto Rican and Dominican musician Tatiana Figueroa, a musician she met in Philadelphia. The duo have a project together and an EP in the making. Last Tuesday, the two performed a session at Love Park for Pride and Immigrant Heritage Month, hosted by REC Philly, a local creative space described by Forbes as a WeWork for musicians.

Oliveira believes her career is looking up.

“I feel like I’m just in the right path,” Oliveira said. “Everything feels right and everything that I’ve been coming across and doing is very aligned with who I am and what my mission is in this life.”

Oliveira hosts jam sessions in her home in Fishtown. Tati & Alexia, as the duo call themselves, tour locally and have performed at various venues including Underground Arts, Silk City and Milk Boy. 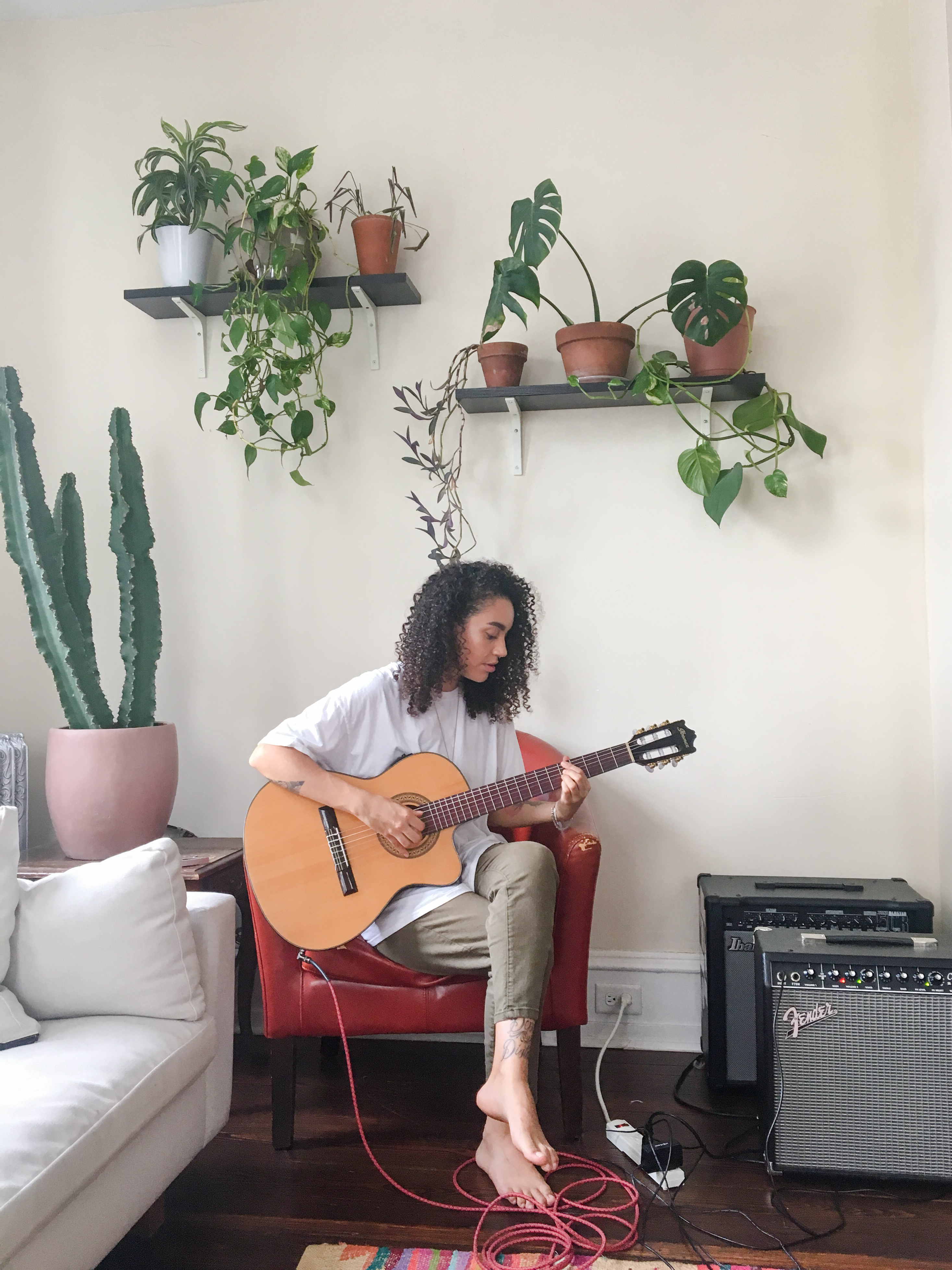 Alexia Oliveira’s living room is where she holds jam sessions. 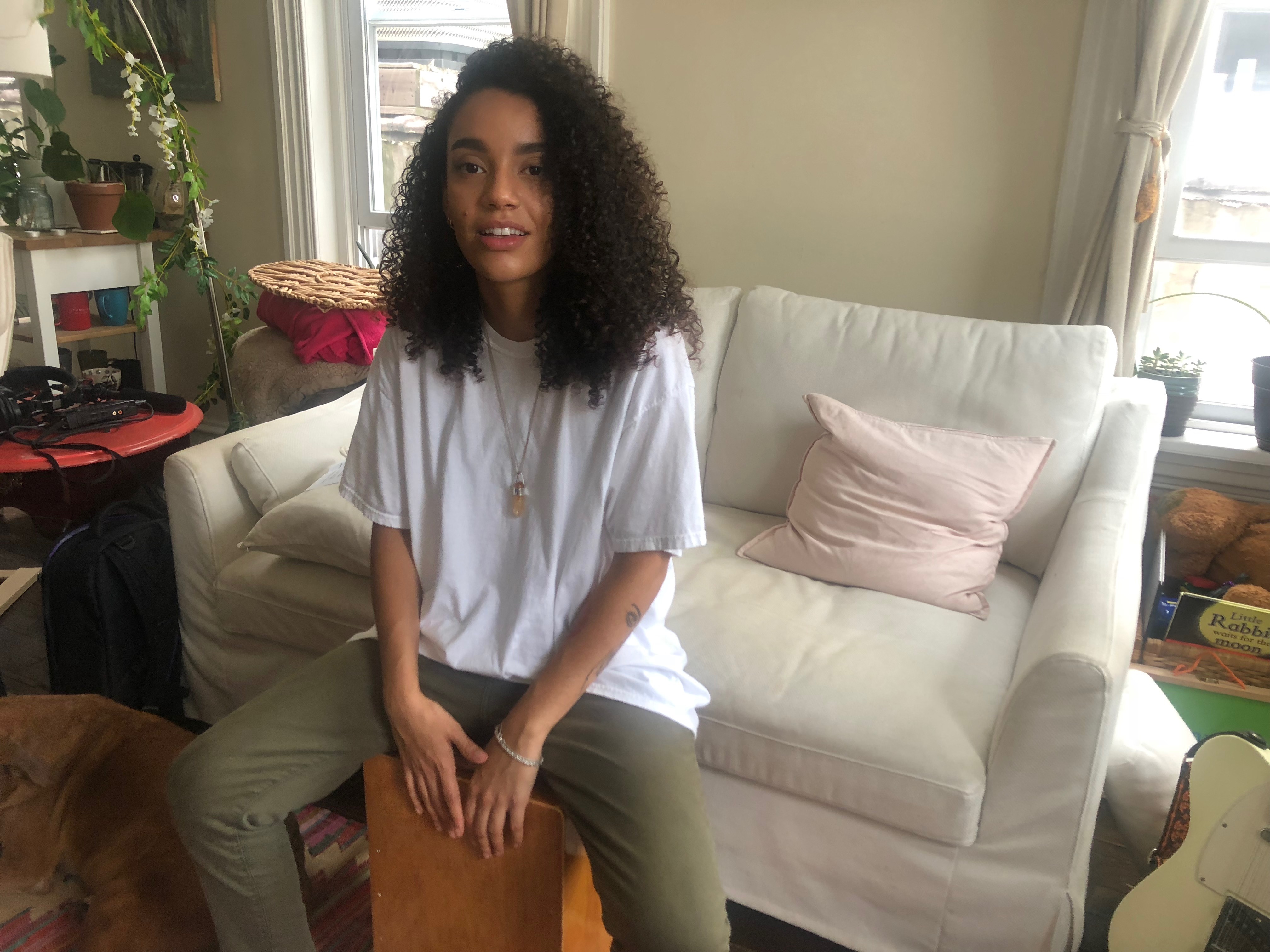 Along with the guitar, Oliveira also plays the cajón that musically connects both her Brazilian and African roots. 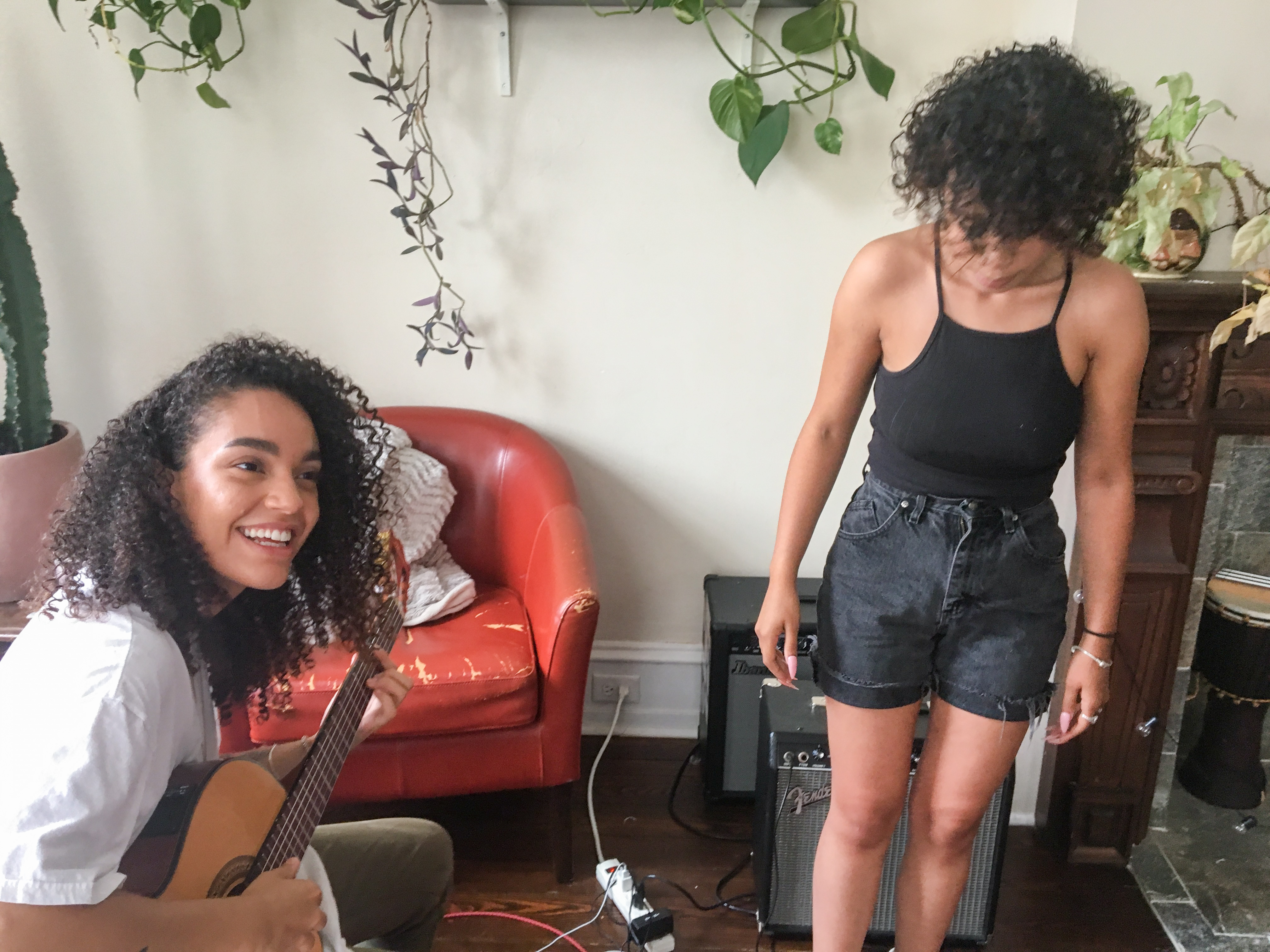 Oliveira and Tatiana Figueroa setting up to perform. Oliveira shares her home in Fishtown with six roommates and pays her bills working in the food industry.

“I feel like I’m just in the right path,” Oliveira said. “Everything feels right and everything that I’ve been coming across and doing is very aligned with who I am and what my mission is in this life.” 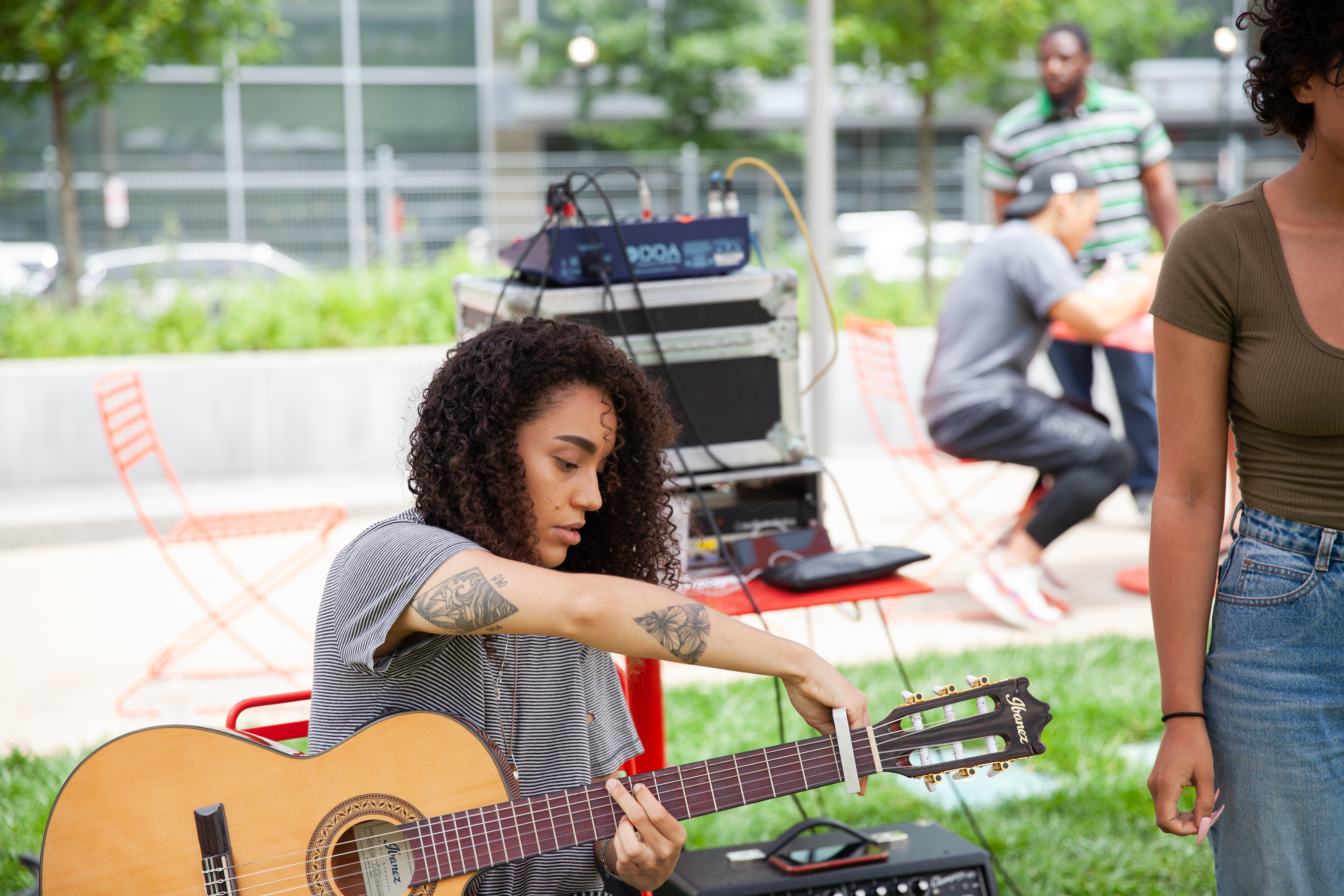 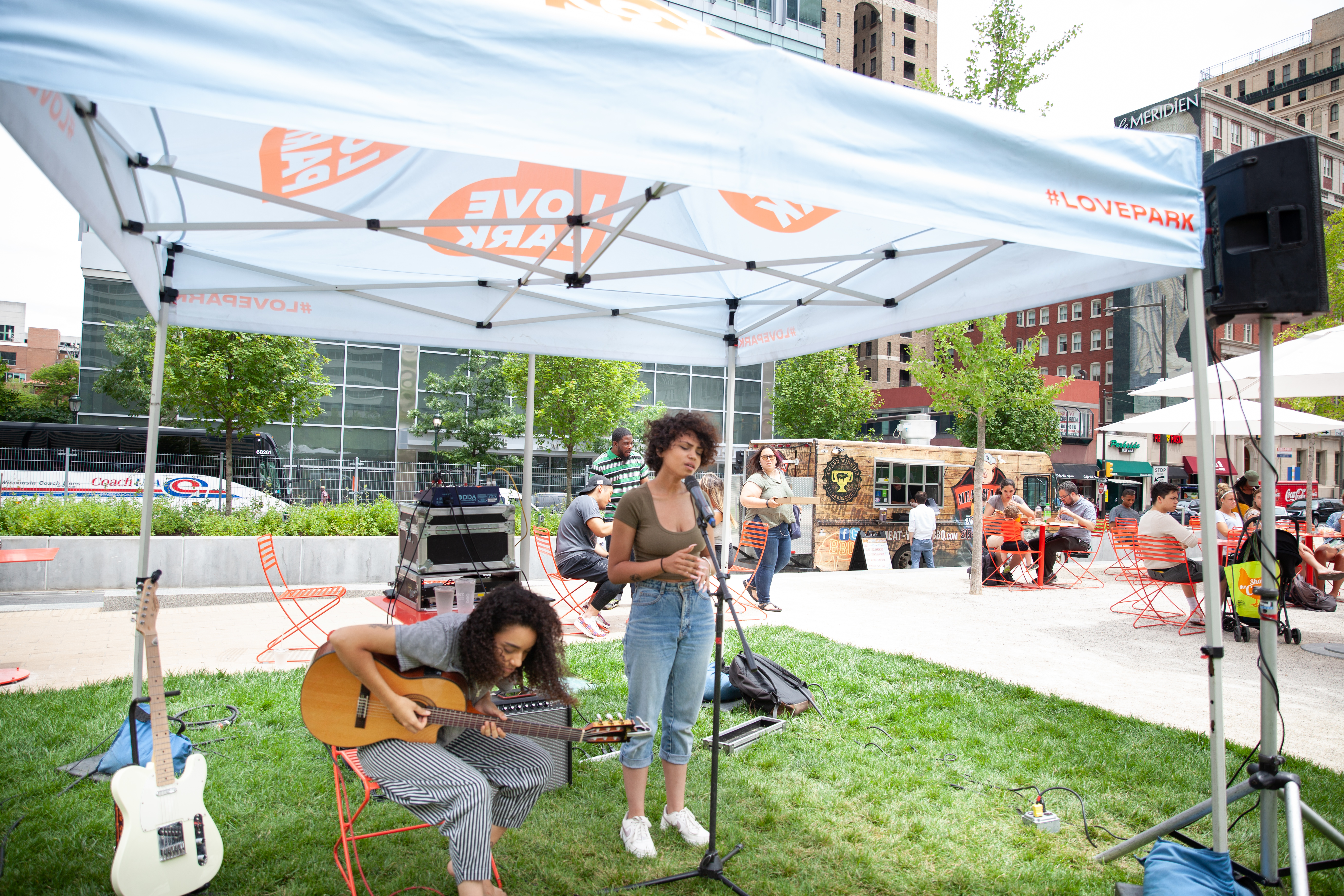